Back in the 1980s, government leaders in Smyrna realized Atlanta’s sprawl was about to swallow their municipality and subtract its sense of place. Using no shortage of classic brick, Cobb County’s “Jonquil City” created a town center in a modified Williamsburg style over the next decade, incorporating a central fountain area surrounded by a library, City Hall, and Village Green for concerts and festivals.

The results earned Smyrna the Urban Land Institute’s prestigious Award of Excellence—but that was nearly 25 years ago.

Sensing that it’s time for a refresh, Smyrna Mayor Derek Norton unveiled plans recently for a downtown redesign that would cleave out a brick-laden roundabout and build a larger greenspace, parking deck, and three-story brewery overlooking it all.

“My vision is an active, vibrant, pedestrian-friendly downtown,” Norton announced in early June, “and I believe the plan … goes a long way towards making that vision a reality."

But like any public-funded big idea, the mayor’s downtown dream has its detractors. They include an architect who lives next door and feels the changes would essentially “de-urbanize” the city center she favors today. 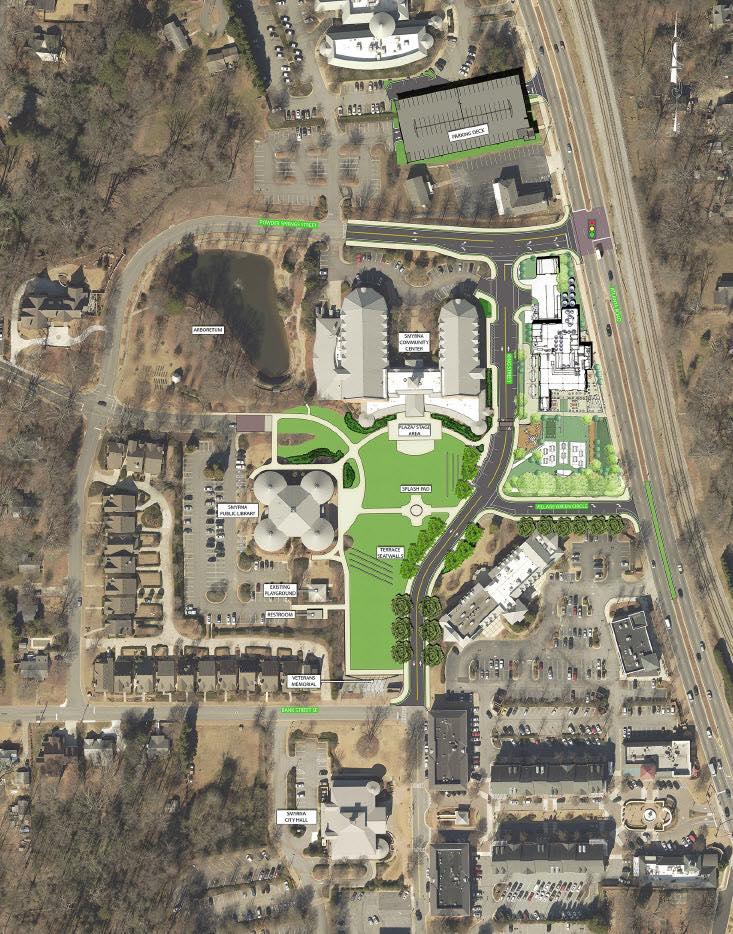 A detailed look at the mayor's planned overhaul of communal spaces, empty land, and streets off Atlanta Road. City of Smyrna

Time is of the essence, as the Smyrna City Council is expected to vote on the conceptual plans during a Monday evening meeting. (Two public input sessions have been held so far, and a third is planned Saturday afternoon.)

Maryam Atassi, a Niles Bolton Associates architectural designer who holds a masters degree in architecture from Georgia Tech, moved to downtown Smyrna with her husband to raise their daughter in what they felt was a convivial, character-rich neighborhood with humanistic street designs. She fears the proposed changes will create a “drive-to tourist destination” gutted of its current charms.

“The plan eliminates the human-scaled streets and introduces a new road that will inevitably be an automobile gutter,” Atassi wrote in an email to Urbanize Atlanta. “I’m disappointed to see the east-west street get wiped out. The existing circle foregrounds the civic buildings, [and] the proposed, amorphous green-colored blob is not appropriate for the center of a downtown. Gone is the fine-grained urban fabric that knit the neighborhood together.

"If the roundabout is too auto-oriented," Atassi continued, "I’d rather see it transformed into something like a town square. Whatever the change is, it ought to connect more delicately into the neighborhood context and the underlying framework of streets and blocks."

With its proposed splash pad for kids amidst the green lawn, the city’s plans draw inspiration from The Battery nearby and Suwanee Town Center. A new road would essentially cut the neighborhood in half, Atassi says, and the addition of a parking deck and brewery would make it less livable, as she sees it.

“This is so exciting!” read one response. Another: “Bring on the brewery! We’ll go all the time—sounds amazing!” While others were more measured: “This looks great, but I do question the need for the parking deck. Hard to tell, but it seems too far removed from the rest of the area to be useful.” 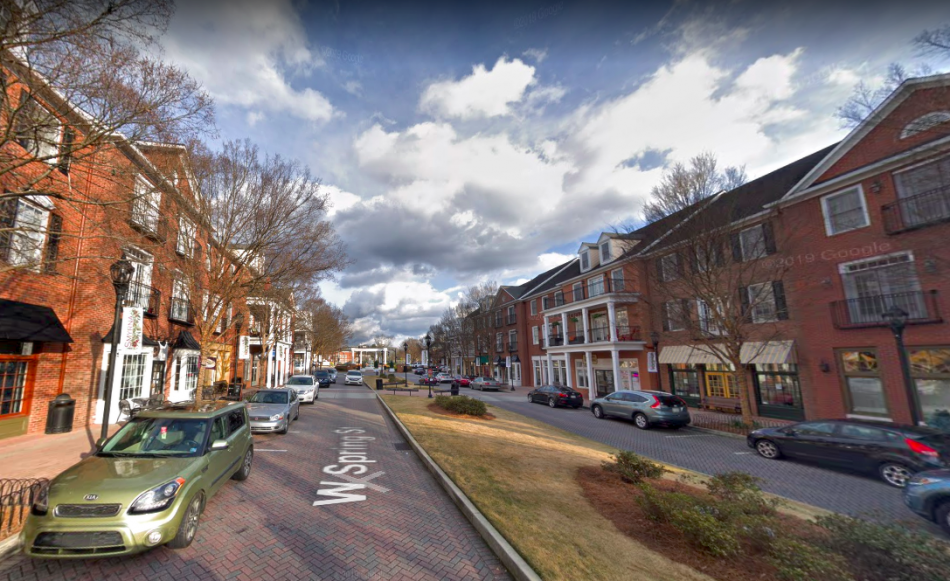 The residential section of nearby Smyrna Market Village. Google Maps

That 250-space parking facility, which the mayor called “much needed,” would rise along Atlanta Road north of the city’s community center.

Other additions would include a public restroom, playground, small dog park, and a new traffic signal at Powder Springs Street.

According to the mayor, Suwanee-based StillFire Brewing has agreed to operate the three-level new brewery space, should plans be approved. The building would include a rooftop bar overlooking downtown.

All changes would be funded with a Special-Purpose Local-Option Sales Tax, or SPLOST, approved by Smyrna voters in November, the mayor noted.

Metro Atlanta has no shortage of thriving, growing city centers across the suburbs. Should Smyrna act now in hopes of catching up—or head back to the drawing board?