As part of its ambitious, recently unveiled “Amtrak Connect US” plan, the longstanding American train company makes no bones about the state of rail service around the capital of the Southeast, as with other metro areas:

“Major cities like Houston, Atlanta, and Cincinnati have service that is simply inadequate, with trains that only stop once a day and often in the middle of the night.”

Sensing an ally in the White House, Amtrak has proposed a massive, $75-billion expansion over the next 15 years that would route new train lines to cities and towns from coast to coast—lending the same connectivity that Amtrak customers in the Northeast have today. High-growth cities from Texas to Tennessee and Florida are a priority.

For Atlanta, Amtrak’s plan calls for creating a true regional hub with new train routes to Chattanooga, Nashville, Montgomery, and Savannah, plus additional services to Charlotte and Birmingham.

“Atlanta residents were once able to travel to Savannah … multiple times a day by train, but that hasn’t been the case for many years,” as Amtrak’s plan summary notes. “One of the proposed new routes will give city residents access to the ocean once again, although you’ll have to rent a car or use rideshare services to reach the beach and Savannah Historic District from the Savannah Amtrak station.” 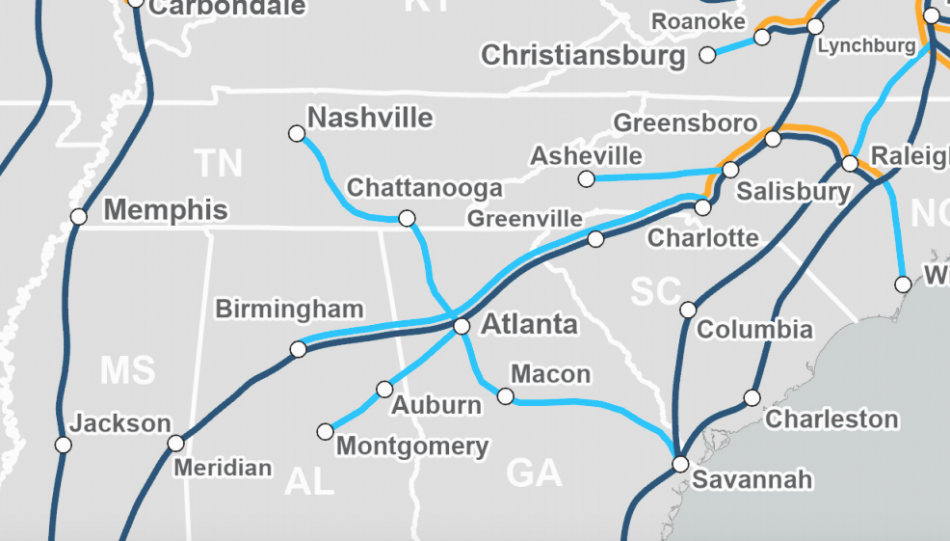 Currently, Amtrak runs only one route through Atlanta, stopping once a day at the Peachtree Station where Midtown meets Buckhead. (Sunbelt brethren such as Nashville, Phoenix, and Las Vegas have no Amtrak rail at all.)

Scant services are typical outside of the Northeast, as Amtrak’s rail map has changed very little in the past half-century, even as the U.S. population has nearly doubled, as the Washington Post reports this week.

It’s no coincidence Amtrak’s plans have emerged as a White House administration helmed by President Joe Biden—famously an Amtrak customer for decades—has shifted priorities to beefing up America’s rail infrastructure and other modes of transportation not involving single gas-powered vehicles.

Intercity rail, as Biden recently said at a Philadelphia Amtrak event, has a “once-in-a-generation opportunity” to draw financial support and rebound, as the newspaper relayed.

Amtrak’s $75-billion proposal would replace aging infrastructure, build new rail and stations, and cover the cost of train cars by 2035. 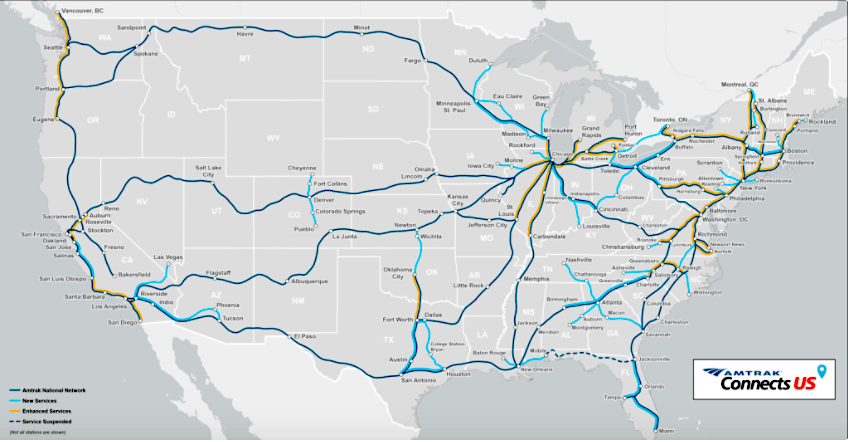 Funding from Biden’s contested infrastructure proposal is considered critical for kickstarting Amtrak’s plans, but other federal funding sources would also be crucial if the Connect US goals will be fully realized.

Another unknown is the willingness of states to partner on Amtrak’s rail expansion. And opponents who argue the substantial price of Amtrak’s plan wouldn’t justifying “insufficient” consumer demand could present another hurdle.

“Even if those goals are conquered,” notes the Washington Post, “Amtrak would still need a nation in love with cars to come back to the rails.”

So don’t start planning that weekend train trip to Tybee Island just yet.

• As expansion nears, what's your greatest wish for the Atlanta Streetcar? (Urbanize Atlanta)