A hotel property that’s been described as an instant landmark and cornerstone of Alpharetta’s resurgent downtown has officially opened.

The Hamilton, a 119-room Curio by Hilton hotel, replaces a row of low-rise buildings on Milton Street and brings several new dining and drinking concepts to the downtown mix.

Developed by Mayfair Street Partners, the classical-style lodge joins about three dozen restaurants and retail options that have materialized over the past few years in Alpharetta’s new urban-style node, which spans several blocks.

The Hamilton project includes a tucked-away, “hush hush” entertainment venue, Roaring Social, described as a “resurgence of the 1920s speakeasy” with a street-level entrance through the back of an adjacent retail clothing store. Expect live music and an eight-lane bowling alley.

The Hamilton’s two on-property restaurants are called Carrie’s Conservatory (a relaxed Parisian environment) and Fulton House (a more traditional Southern take, with a robust wine program). Rounding out the property are two retail spaces—one leased by Makimono Sushi, as officials relayed this spring.

The hotel’s meeting spaces are designed to accommodate anything from intimate weddings with close family and friends to crowds of 200 people.

Décor was inspired by Western & Atlantic Railway, and the goal of the property overall was to meld a vintage Southern feel with modern efficiency. 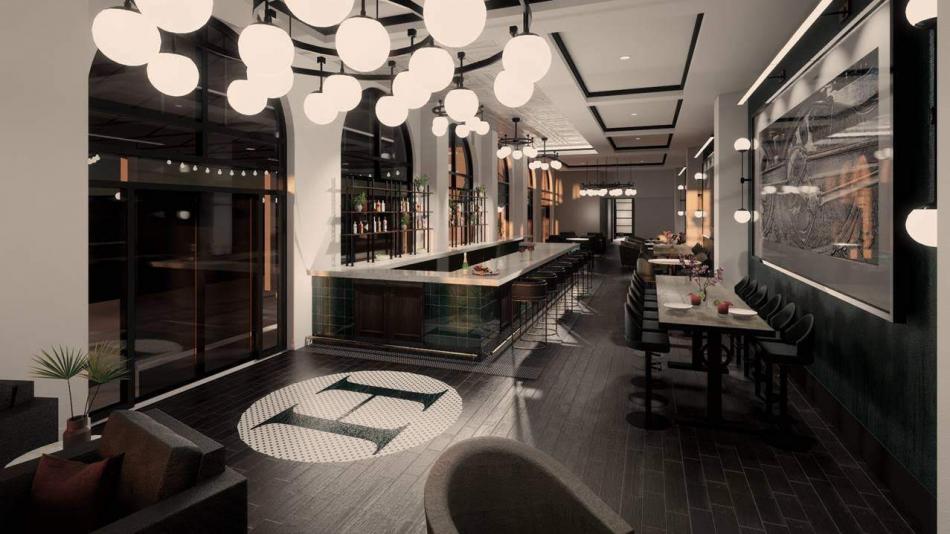 Carrie's Conservatory at The Hamilton, one of two in-house restaurants. Courtesy of Mayfair Street Partners; designs by RBA Architecture

The process to introduce Alpharetta’s first boutique hotel took four years. “I’m confident we’ve accomplished what we originally set out to do in adding not just a hotel, but a center point and destination for the city,” Jason Joseph, Mayfair’s managing director and partner, said in an announcement today.

Opening nightly rates at the property, which will be managed by Hotel Equities, begin around $200.

That company’s president and CEO, Brad Rahinsky, called The Hamilton “a destination our community can be proud of for generations to come.”