In case you’ve moved to Atlanta since, say, early 2020 and aren’t familiar with Atlanta Streets Alive (like so many longstanding neighborhood festivals), here’s a quick recap:

Inspired by ciclovía events in Bogotá, Colombia and other cities, ASA began meagerly one day in 2010 by opening Edgewood Avenue to bicyclists, skaters, walkers, and anyone else not driving a car.

Over the next decade, the Atlanta Bicycle Coalition-organized events drew increasingly more massive crowds—some 1.7 million people total—to street-opening programs spanning from DeKalb Avenue at the Decatur line to West End and Collier Hills. ASA opened up streets—including Peachtree Street for miles, from South Downtown to Midtown, on several occasions—to Atlantans across the city. It happened three or four times per year, for a few hours on Sundays.

And then: a global pandemic. 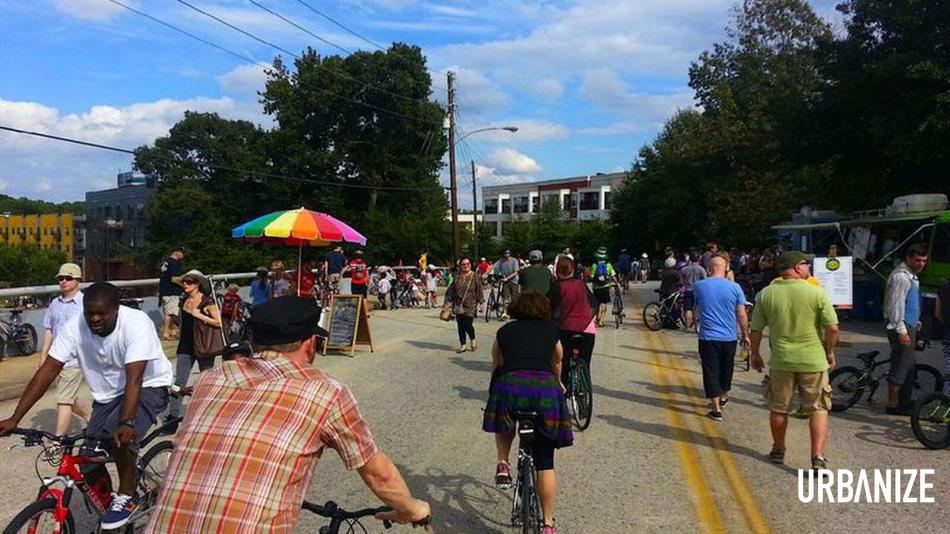 The silver lining to COVID-19’s shutting down ASA events last year, as ABC executive director Rebecca Serna tells Urbanize Atlanta, is that it allowed the agency to step back and evaluate a process that would allow for more frequent open streets in the city. (The consistent complaint with ASA over the years, after all, was that it didn’t happen enough.)

The bad news: No street-opening festivities are planned for the remainder of 2021. But next year, as Serna said, the agency is planning a pilot concept that could mean ASA events will be scheduled on a monthly basis.

“One of our 2021 priorities is to collaborate with the Atlanta Department of Transportation … to create a process that would allow car-free streets to happen more often,” Serna wrote in an email. “So that's our focus right now.”

In partnering with ATLDOT, as Serna explained, the goal is to streamline the process of coordinating traffic and other facets, which previously required between 40 and 50 partners per event. They also hope to create a more straightforward car-free street permitting process that makes ASA events less special occasion and more normal operating procedure.

“It’s really gratifying to hear all the requests for Atlanta Streets Alive [this year],” Serna added.